One of the things that happens as I learn to cook is that I inevitably have leftovers. OK, I often have leftovers from eating out as well, but that’s beside the point. The point is that I frequently have extra food in my fridge, and sometimes that food is a little…smelly. Not smelly in a bad way. It’s just that garlic aioli has a powerful scent that can seemingly contaminate everything in the fridge. With the Oransi Ionic Fridge Air Purifier, you can safely and easily eliminate stinky food odors from your fridge.

The Oransi Ionic Fridge Air Purifier is a small and compact purifying unit that takes up less room than a Chinese food takeout box. It runs on two AA batteries and cycles on and off automatically, sterilizing your fridge every two hours. It utilizes “exclusive piezo-electric technology” to purify the air inside your refrigerator, helping to effectively remov smells, kill bacteria, and prevent mildew. I’m not exactly sure how the technology works (is there an engineer in the house), but Oransi explains that it “allows for a high negative ion output to freshen your refrigerator without the harmful side effects of ozone that is found in standard ionizers.” Food particles, bacteria, and other particles attach to the negative ions, and (I think) get attracted to a metal plate that is inside the purifier – thus neutralizing the particles from effecting your food. Once you install the batteries, simply hit the power button to turn on the purifier. An orange LED will appear to let you know when the unit is on. When you first turn on the purifier, it will run continuosly for 30 minutes (to get rid off all the stink.) After the initial “cleanse” it will run for five minutes every two hours. When I put my hand close to the purifier, I could feel cool air being emitted from it, which boggles my mind since it was completely silent and doesn’t even have any fans. It must be the negative ions at work. 🙂

I’ve had the Oransi Ionic Fridge Air Purifier in my fridge and have definitely noticed a reduction in smell. The lingering garlic aioli scent that was hanging around is gone. There really isn’t a way for me to measure killing bacteria or mildew generation, but those are just bonuses for me. I just love that it purifies the air regularly and that it keeps my fridge odor free. (By the way, if your blessed with a nice smelling fridge, you can also use the purifier to get rid of odors in closets, bathrooms, and other smelly places.) With the holiday season upon us, you’ll want to make sure that your pumpkin pie doesn’t start smelling like turkey or that your stuffing doesn’t smell like cranberry sauce. If you’d like to pick up an Oransi Ionic Fridge Air Purifier, you can purchase one online on Amazon for just $29.00.

One winner will receive an Oransi Ionic Fridge Air Purifier to keep your fridge smelling fresh!

This giveaway is now closed. A list of all giveaway winners can be found on our Giveaway Winners page. 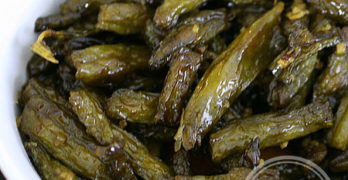