Return to Top
You are here: Home / ponderings / The Case of the Floating Balloons

This is a story of three balloons. Three balloons that my wonderful friends gave me for my @^!th birthday about a month ago. Look how pretty they are! After my party, I brought the balloons home (who wouldn’t? Everyone loves balloons!) and attached them to a metal water bottle to keep them from floating away. As the days passed, the balloons were staying afloat beautifully. So well that at first, I wasn’t that surprised when one of them floated to the top of my 20 foot ceiling. “I must not have attached that balloon very well,” I thought. But then, one by one, each of the balloons floated to the top of the room so that by the end of the week, all three balloons were happily floating out of reach in the corner of the ceiling. I decided to take a closer look at the water bottle to determine had happened, and AHA! I found some clues. Notice the very clear, kitty shaped tooth marks that are all over the strings! The mystery of how the balloons go to the ceiling was solved! Clearly one of the cats had been gnawing on the ribbons, releasing one balloon each day.

The only question is, which kitty is the guilty feline? Both suspects have been spotted at the scene of the crime! What do you think? Who looks like the kitty culprit? 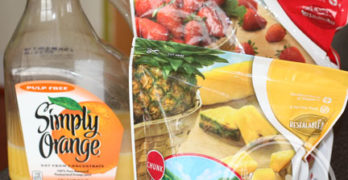