It’s a little known fact (unless you’ve been following this blog for awhile) that I used to work at a meal assembly store. I kind of chuckle at the thought of it, as I see how funny it is that someone who didn’t even know how to make a grilled cheese sandwich was working at a place that had anything to do with food. At the same time, it also makes sense – at meal assembly stores, it’s almost like a dinnertime paint by numbers. They tell you how much to scoop and you pretty much throw everything into a bag, then freeze it to cook at a later date.

Needless to say, I ate a lot of assembled meals while I worked there, and as I ate, I discovered some pretty tasty foods. One of my favorites from this store was their Canadian Bacon Stuffed French Bread. Let me tell you, this is probably one of my favorite sandwiches of all time. Buttery, cream cheesy coated French Bread sandwiching Swiss Cheese, Canadian Bacon, and Sausage. I’m getting hungry just thinking about it. This sandwich is perfect for parties, tailgates, or even just for chowing down. I’ll be honest that this shouldn’t be considered healthy by any means. It uses a full stick of butter and cream cheese for the spread alone. But those extra calories are sooooo worth it. While the store’s recipe is proprietary (and I never memorized it) I finally found a recipe that captures the essence of their stuffed french bread.

To start off, you can pick up a loaf of French bread from your local grocery store. If you plan on freezing the sandwich, you can also check the freezer aisle to see if they have any “par-baked” (partially baked) bread. I used a loaf of freshly baked French bread. Cut the top half of the bread off so you have a top and bottom for the sandwich. The top and bottom half of our sandwich.

Next, we’re going to make the spread. Make sure you let the butter soften so it can easily blend with the cream cheese. You can hand mix if needed, but I threw the butter, cream cheese, onion flakes, poppy seeds, and dried parsley into my mixer and let it do all the work. I blended on medium speed for less than a minute to get a nice, creamy spread. Next, spread the mixture on the top and bottom halves of the French bread. There is more than enough spread to add a good layer to each half, so feel free to be generous if you want, or you can go lighter (but then it’d be a little less flavorful.)

Once the spread is on the bread, it’s time to layer on the other ingredients. First, it’s the Swiss cheese. My cheese came in squares so I just cut across the diagonal to get 8 triangles. Depending on your loaf and the cheese, you might have a little overlap of cheese. The first layer is down – Swiss cheese.

After the Swiss cheese, it’s time for the Canadian bacon. You can usually find Canadian bacon at the grocery store. I found mine near the breakfast meats. Everything is better with Canadian bacon.

Finally, we’re topping the sandwich with the pre-cooked sausage crumble. Again, I found this in the breakfast meats section. If you can’t find it there, you can always grab some Jimmy Dean and cook up your own sausage crumble. Do this step a little slower since the crumble can tumble off the bread if you aren’t careful. Place the top of the bread back onto the bottom half, wrap in foil, then bake in the oven for 15-20 minutes – long enough for it to get hot and for the cheese to melt. One sandwich is supposed to serve 8 people, but I can pretty much guarantee that everyone will eat a double serving – it’s that good. This Canadian Bacon and Sausage Stuffed French Bread sandwich is so easy to make with such delicious results. Let me know if you give it a try! 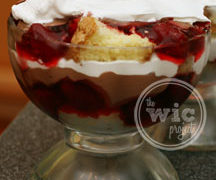