I’d heard the virtues of slow cooker cooking for awhile, but didn’t even know where to begin. Then I got my first slow cooker and a whole world of cooking unveiled itself to me. A world where you can throw everything in a pot and just let it cook for hours.

Here’s one recipe that has quickly become popular here. We love General Tso’s chicken but frying the chicken for it isn’t always time-friendly (or healthy for that matter.) I decided that there had to be another way to get that great spicy General Tso’s flavor.

It’s kind of funny to cook Chinese style food in a slow cooker. Chinese food purists probably wouldn’t approve, but that doesn’t take away from the fact that while this might not be “authentic”, it’s still pretty good General Tso’s chicken. (Not to mention, that technically, General Tso’s chicken isn’t really even Chinese, but that’s a whole other story.) Just throw everything into a slow cooker and let it cook. 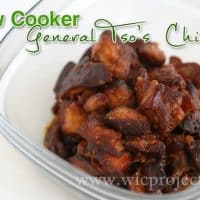 True to slow cooker recipes, you can add all the ingredients into the pot, give it a stir, then let the slow cooker do the rest. With 1/2 tsp of crushed red pepper flakes, this has a little kick but it isn’t too much. For spicier General Tso’s add more red pepper flakes and for a kid-friendlier version (no spice) you can reduce or eliminate as desired.

Our recipe for Chinese Style Green Beans would also be a great side with this. Alternately, you can add some frozen veggies to the slow cooker during the last hour of cooking to make it more of a stir-fry type of dish.

Have you ever cooked Chinese food in a slow cooker? 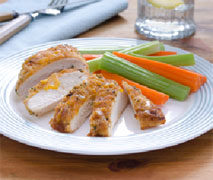