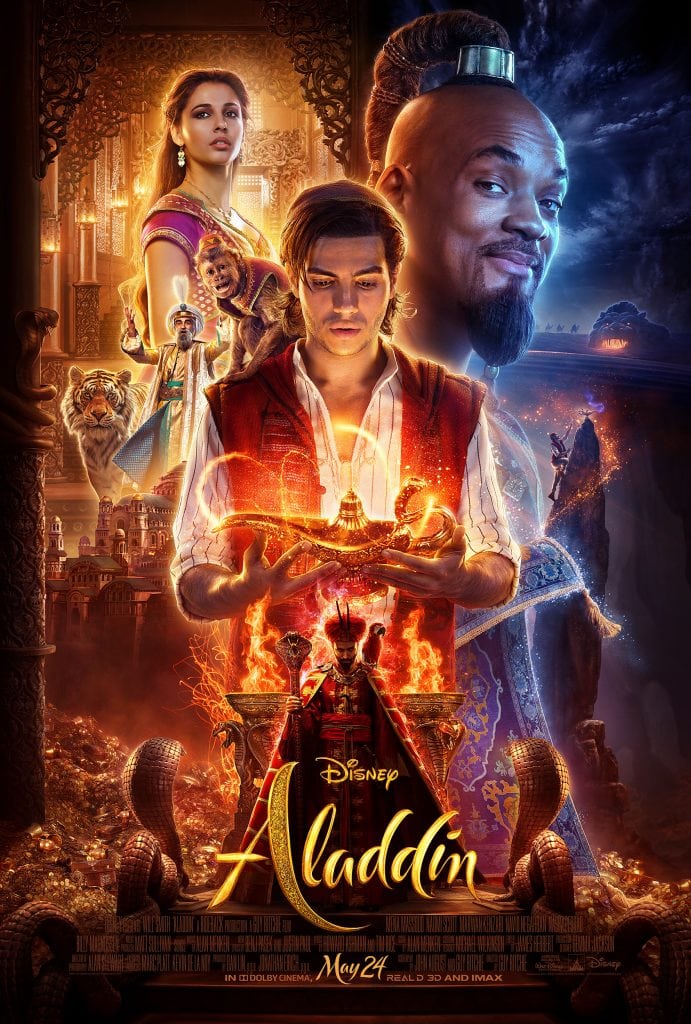 Aladdin is the latest Classic Disney animated feature adapted into a live-action musical film from Walt Disney Studios Motion Pictures. An incredible all-star cast with Will Smith as Genie, Mena Massoud as Aladdin, Naomi Scott as Princess Jasmine, Nasim Pedrad as Dalia, Alan Tudyk voices Iago, and Frank Welker returns to voice Abu, Cave of Wonders, and Rajah giving this movie star power. For the review, we saw it in 2D IMAX, it’s available is several platforms, and rated PG.

The movie opens with a family on a boat; the father begins to sing the tale of Aladdin to his children. The movie cuts to Aladdin and his pet monkey, Abu, and partner in crime, living as a street rat in Agrabah and surviving through pickpocketing. He encounters a naïve maiden, a disguised Princess Jasmine, from the palace and saves her from danger by asking her to trust him while using her beloved bracelet as a ruse. As they outrun the guards, they arrive at Aladdin’s hidden home with magnificent views and perspective. The maiden must return to the palace, Abu has hidden her bracelet, so she thinks Aladdin has betrayed her. After Aladdin sneaks into the palace to return the bracelet, he discovers her true identity, and he promises to meet her the next night. Unfortunately, he encounters Jafar, an evil Grand Viziar who covets the power of the Sultan. Jafar recognizes Aladdin as a “diamond in the rough” and offers him a deal to retrieve a valuable from the Cave of Wonders in exchange for his freedom. In the cave, Aladdin is tempted by jewels and gold, but he knows he can only retrieve the magic lamp to survive. He encounters the Magic Carpet and frees it, which earns him its loyalty. As he secures the lamp, Abu is mesmerized by a ruby, and this angers the Cave of Wonders. They survive, and Aladdin accidentally conjures Genie from the lamp. Genie explains, in a wonderful musical number, how the lamp and three wishes work, and they manage to escape. Aladdin doesn’t lose one of his wishes due to a technicality. Aladdin promises freedom to Genie as his final wish if he helps him win the heart of Jasmine. 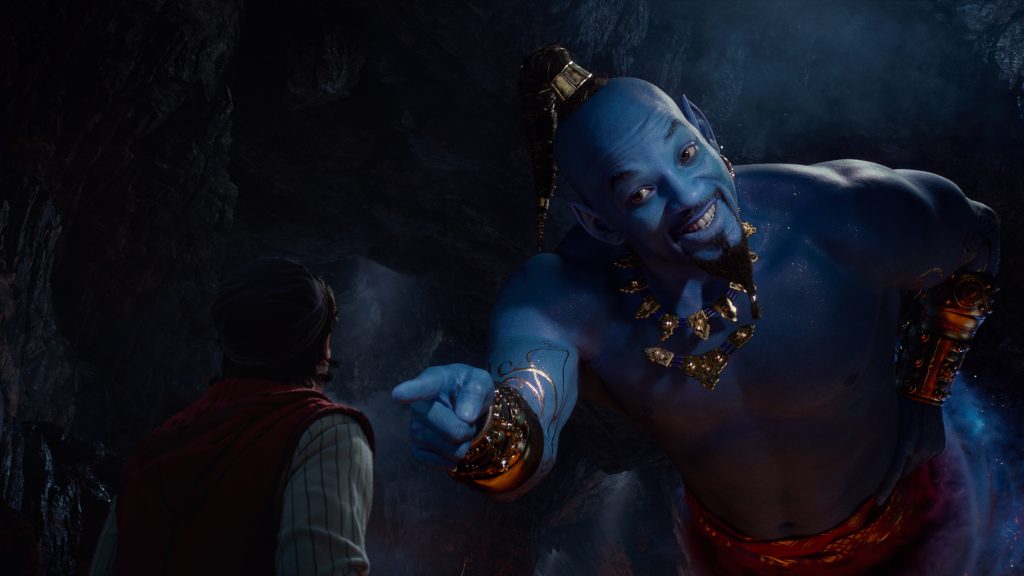 Aladdin returns to Agrabah in splendor with pomp and circumstance disguised in plain sight as Prince Ali of Ababwa. Princess Jasmine is not impressed with the bumbling Prince Ali, but he intends to woo her and earn her trust again. Thus, the romance between Princess Jasmine and Prince Ali begins with the help of Genie, the Magic Carpet, and Abu. As the story enfolds, we are treated to more song and dance musical numbers, the thrill of the chase, and the evil lurking with Jafar and his nosy macaw who always seems to find Aladdin and return with secrets. Princess Jasmine will have to learn to trust Aladdin/Prince Ali all over again as she falls in love while yearning to be the next Sultan. 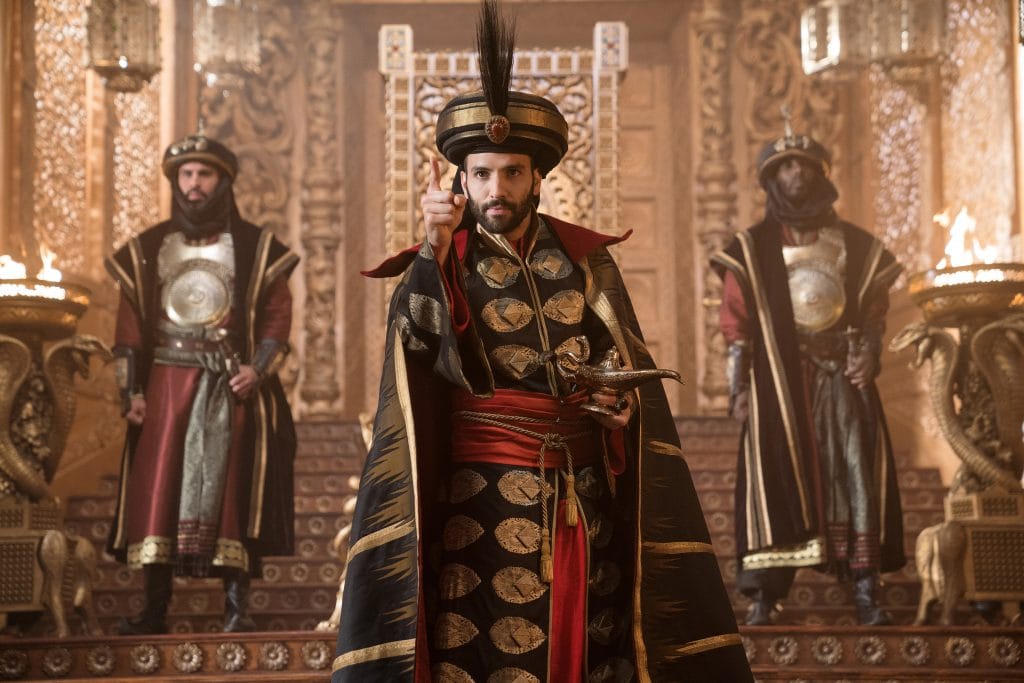 The movie is magical and entertaining as the musical scores and pacing move the story. The set designs are amazing, the costuming is exquisite, and the dance routines use some of the classic songs and new ones blended seamlessly with a bit of hip hop twist. “Speechless” is a powerful song, “Friend like Me” is reworked and has the melding of the original with a fresh rap beat—the influence of Will Smith and DJ Khaled is obvious and will help make this a summer hit. Stay through the credits to hear it in full. “A Whole New World” returns for the enchanting Magic Carpet ride.

Mesmerizing from the beginning, this family-friendly movie is perfect for summer and delivers with a classic tale redesigned for the contemporary audience through action, adventure, danger, comic relief, a magic carpet, and a fun romance. Will Smith as Genie is perfect for the role—he makes it his own while giving a nod to the original voiced by Robin Williams. The entire cast makes this story enjoyable to watch. Grab a friend or your family and go see this movie. You will be charmed by the classic tale and constant escapades awaiting on your own magic carpet ride of Aladdin.

Disney’s Aladdin flies into theaters nationwide on May 24, 2019!