I’ll admit that when I first saw this dish on the menu, I was more than a little skeptical. I’m always somewhat wary when I can’t tell what’s in the sauce based on the name of the dish (what would be in ‘picnic’ sauce??) For example, if Chicken Teriyaki was called Chicken with Mystery Sauce, I wouldn’t be jumping to order it. But getting back…I was a little wary of the dish when I first saw it, but decided to take the plunge after several people posted pictures of happy little toddlers with sauce all over their faces and a plate of chicken in front of them. If it tastes good to a 5 year old, it’s got to taste good, right?

RIGHT! The grilled picnic chicken is an awesome dish.  The sauce was advertised as a “subtle Asian BBQ” sauce, but I don’t think it was that subtle (or that Asian…Asian’s don’t cook with raspberry.) It didn’t require a refined palette to taste the flavors, which blended together nicely for a savory yet sweet sauce. The hoisin and raspberry flavors were more prominent to me than the others. The chicken came out nice and tender. The dinner is very easy to prepare. Throw the chicken in the provided baking pan or onto a grill, heat up the marinade, and then glaze. If I had a gripe, it was that when they used the whole chicken, I ended up with a whole lot of bones, and not nearly enough dark meat. One day they will invent a chicken that is all dark meat. Or someone will start a chicken meat exchange program where I can trade all of my white meat for their dark meat.

Once again, Dream Dinners has created a VERY tasty sauce for their chicken. I’d make a little bit of extra sauce at the store so you can use it to pour over your starchy side dish (mine was rice pilaf and it was awesome.) 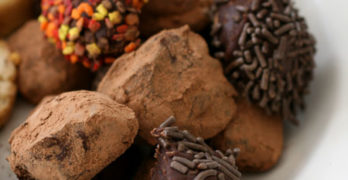