Return to Top
You are here: Home / Reviews / For the Home / Mix-Master Miriam – Any Advice?

I’ve decided that it’s time for me to buy a mixer. I think I’ve proven myself in the kitchen (kind of.) When I make pancakes, I beat my egg whites…by hand…with a whisk. Not even one of those rotary ones! Brownies, cakes, and cookies ALL get mixed by hand. And I have a huge right bicep to prove it. OK, maybe not huge. But I’m pretty sure it’s bigger than my left bicep.

I had a mixer once. It was an old beat-up thing where the bowl didn’t rotate unless you pushed it. I think only 3 of the 10 speeds actually worked. And to get the beaters in, you had to put in the left one first, twist to the right, jiggle, then put in the right one, quarter turn to the left, pull out slightly, then push in. Half the time the beaters still fell out half way through the mixing process.

I also had a handheld mixer at one point, but after three moves, somehow I ended up with just the mixer part and no attachments.

But this time will be different. Through the grace of God and heavy searches through Swagbucks, I have accumulated a good amount of gift certificates on Amazon, which I would like to use to buy a brand new, fully functional, mixer. WOOT!

Right now I’m peeping this KitchenAid mixer. It looks pretty cool (yes, part of my decision is based on looks….who wants an ugly mixer?) It doesn’t look too big (counter space is important) and has the attachments I think I’d need. But the $200 price tag seems a little high. Is that a good price? Too expensive? 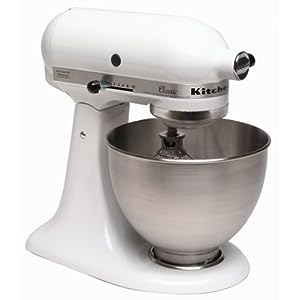 Before I purchase, though, I would love to hear if any of you have a mixer, and if you do, do you like it? If you could buy any mixer on Amazon, which would you get and why?