I was first introduced to the Dunkin Donuts Vanilla Chai in the cold, cold Massachusetts winter of 2006…or possibly 2005. After moving out of the state, I struggled to find another Dunkin Donuts that had the Vanilla Chai (apparently it was optional/seasonal). Finally, last year, I found a local store that had the vanilla chai. It became a part of my weekend routine – walking to get my chai, and then walking home while sipping on this hot brew.

Once I started a new job in the city, I found myself wanting a morning cup of something (I’m not a coffee drinker, which limits my options), but to my dismay there wasn’t a Dunkin Donuts nearby. So I started stopping by the Starbucks and picking up their version of the Vanilla Chai. Let me tell you, Starbucks Vanilla Chai tastes NOTHING like the Dunkin Donuts vanilla chai. But after a few months of Starbucks Vanilla Chais, I found myself looking forward to them in the mornings. 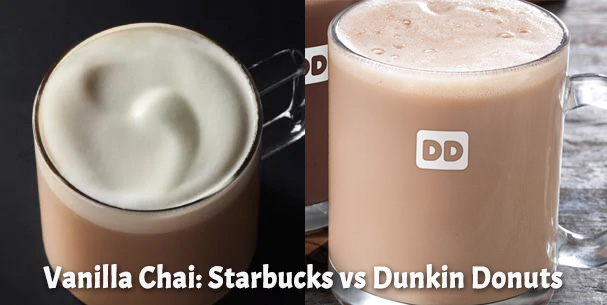 I’m finding it hard to choose. The Starbucks version feels “lighter” and has more of a kick to it. I definitely get a nice jolt of caffeine and the flavor doesn’t stay on your palette. The Dunkin Donuts version is creamier (the ingredients list shows it has non-dairy creamer in it), but it is also sweeter and the flavor lingers for quite awhile after the last sip. It’s perfect for a cold day when you’re going to hide under the cozy covers all weekend.

Make Your Own Vanilla Chai at Home 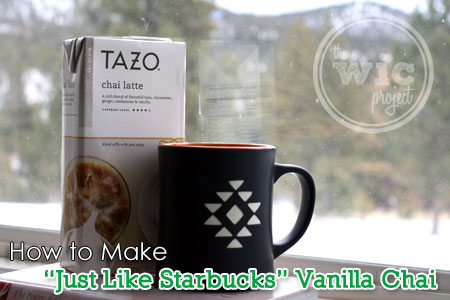 How to make a “Just Like Starbucks” Vanilla Chai Tea Latte at home!

The closest product we’ve found to replicate Dunkin Donuts Vanilla Chai is Big Train Vanilla Chai, which is a powdered mix. It’s available on Amazon. I recommend making the recipe with milk to get it most like the Dunkin Donuts version, but you can adjust the milk to water ratio to suit your tastes.

Do you have a preference? Is there another version of Vanilla Chai that I just have to try?